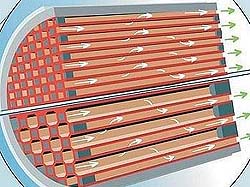 With its process “FilterMaster for cars”, the group of companies FilterMaster DPF offers separation-free cleaning of exhaust particulate filters for cars and vans of up 3.5 tons. The process was developed by the companies Kipp Umwelttechnik and – as of 2014 – with the support of its sister company mycon GmbH over a period of four years. The basis for the process was first developed in the course of an AIF funding project in which the University of Paderborn and the technical college Ostwestfalen-Lippe participated. However, it took almost two years after the project was completed until the process was deemed marketable. FilterMaster for cars has already been successfully used since February 2015.
In addition to the flawless cleaning effect, the advantage of the cleaning system “FilterMaster for cars” is that the complex exhaust system does not need to be separated for cleaning. The filter areas need to be exposed for cleaning with the traditional systems. To do this, the housing needs to be separated, in most cases on both sides. The housing is mostly separated via means of a simple parting-off grinder. The parts need to be re-welded after the filter cleaning. The customer has no control over the quality of the welding. Since the welds would corrode due to the discoloration caused by the heat, the housing needs to be treated with aggressive blasting abrasive to remove this discoloration.. The group of companies FilterMaster DPF cleans with FilterMaster for cars without the need for separation. The quality of the housing is fully preserved. The quality and gentle operation of the cleaning process was borne out in tests conducted by the University of Paderborn.

You have other questions about the FilterMaster DPF process and our approach. Then simply get in touch with us. We look forward to your enquiry
Make contact
l

We’re more than happy to advise you

The cooperative association FilterMaster DPF is well placed to advise you in a detailed and professional manner on the whole area of exhaust systems. Our experienced master mechanics are happy to advise you. FilterMaster DPF offers a free service whereby short questions can be answered via phone or email