FilterMaster for cars: Cleaning large enclosed filters without separating from the housing – cost-effective and fast

The filter shown in fig. 1 from a Mercedes Integro bus had already been cleaned at least once before, as was apparent from the unprofessional welding performed afterwards. Separating the housing again would have destabilized its condition even more. Kipp Umwelttechnik GmbH made use of the possibilities of the ‘FilterMaster for cars’ process by using additional equipment – cleaning the car/van exhaust particulate filter without having to separate it. The ‘FilterMaster for cars’ process was also quick and reliable. Kipp Umwelttechnik GmbH now uses the process as standard for all filters installed in enclosed housing. 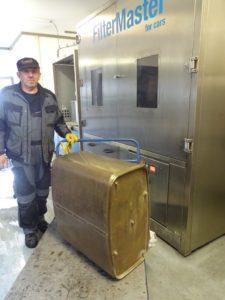 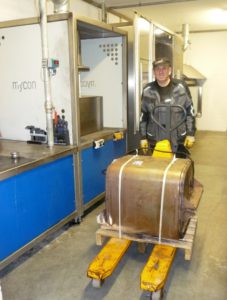 The filter shown in fig. 2 from a MAN TGA (registered in 2005/originally EURO 3), contained heavy soot/ash residues weighing almost two kilograms. In spite of this, cleaning the filter without separating, it was unproblematic.

The filter shown in fig. 3 from an Optare bus/Solo model, was also heavily covered with oil and antifreeze liquid.  Even these residues posed no problems for FilterMaster. After cleaning, the filter was three kilograms lighter.

Consequently, Kipp Umwelttechnik GmbH cleans carefully without the need for separation (even for large filters installed in enclosed housing), therefore the housing will not become weaker in the process.