Findings from a customer-oriented problem solution led to a significant improvement in the cleaning performance of the FilterMaster system when cleaning heavily loaded large filters. The patented FilterMaster process can now also be used successfully with non-catalytically loaded CRT filters.

With the patented FilterMaster system and a subsequent, innovative, gentle after-treatment, Kipp Umwelttechnik solves cleaning problems with CRT filters that are heavily contaminated with inorganic ash and are installed behind a NOX catalyst. These usually do not have a catalytically active coating.

Several large filters of a customer, which always showed a rapid increase in contamination and were known to the customer as problematic, were cleaned with the FilterMaster standard method and showed a clear weight loss after cleaning, which was almost the same for all filters. The differential pressure values corresponded to a new filter. The filters have been cleaned and returned to the customer.

The filter housing was opened and samples of the CRT filter crystal were taken. It was shown that the channels of the CRT filter were largely permeable, but still had residues on the inner walls. The residues were examined with the analytical methods REM / EDX. These were the usual inorganic residues from the combustion of diesel fuel, engine oil and coolant. The latter two components were disproportionately represented. The unusually high amount of inorganic ash can be explained by the increased combustion of engine oil and coolant, since these have a much higher inorganic additive. 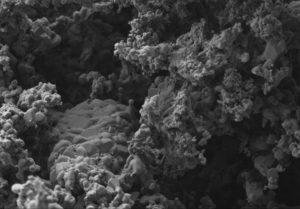 Crystals on the sintered filter wall

1. Opening a filter has shown that our previous test methods (differential pressure test, volume flow measurement) can only give a statement about the cleaning success of the upstream NOX cat in this case. Reason: The total cross section of the passage openings of the NOX cat in relation to the total cross section of the passage openings of the CRT filter appears to be significantly smaller. NOX-Kat and CRT-Filters are very close to each other. Since the area with the smallest cross-section determines the volume flow, the NOX catalyst is decisive as long as the air passage of the filter crystal is higher than that of the catalyst. However, this is presumably also the case when the filter walls are still highly inorganic. The aforementioned tests therefore had no suitable information on the cleaning quality of the CRT filter. The weight measurement, which is also included in our test procedure, can only provide clues, since the loadings of the filters are not the same and the weight of new filters is subject to a large spread.

2. Our patented standard FilterMaster process gently removes soot and ash from catalytically coated CRT filters at relatively low drying temperatures. This results in a complete breakdown of soot. Inorganic ash is practically completely removed. In the case of uncoated CRT filters with an upstream NOX catalyst, the soot is converted, but the inorganic ash is only loosened in powder form in some cases. A very small proportion also remains firmly adhering to the filter walls through channels.

In this regard, ways for a successful after treatment after using our standard procedure had to be found that do not impair the performance of the NOX-Kat. The total costs for this were borne by Kipp Umwelttechnik.

With some effort we have found solutions to both problems. In the meantime, the customer has also been provided with several cleaned filters with the new findings. As a result, we were able to discharge substantial amounts of the residues listed in the analysis and also generate an inspection factor. In our view, the filters are now almost as good as new. If required / for other filter types, cleaning methods and test methods can now be readjusted at any time.

The entire process is now available on the market.